Our Year In Review 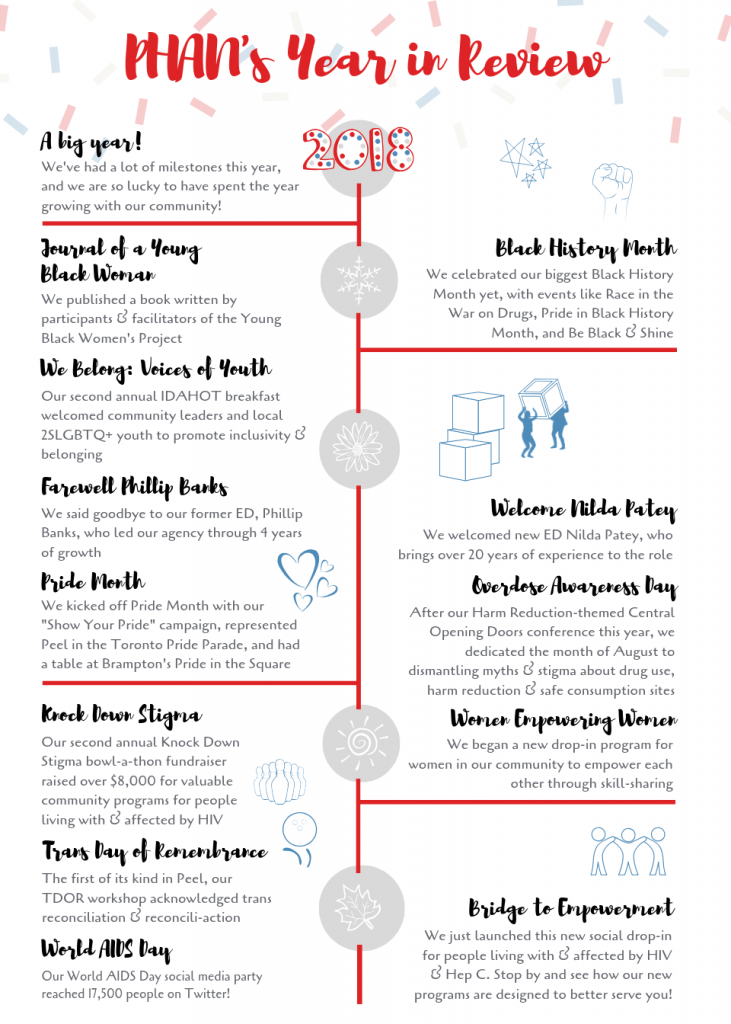 Our Year In Review

2018 has been a big year for PHAN! We’ve had a lot of milestones this year, including the launch of important movements, the introduction of a new Executive Director & new Board members, and exciting updates in our programming. We are so lucky to have spent the year growing with our community and appreciate all the support you have given us throughout the year.

These are some of our most memorable moments of 2018:

Throughout the month of February, we celebrated our biggest Black History Month yet. Over 100 guests joined us for events like Race in the War on Drugs, which discussed how anti-black racism has shaped substance criminalization in Canada; Pride in Black History Month, which celebrated the intersectional identities of 2SLGBTQ+ black folks; and Be Black & Shine/Être noir et briller, a bilingual social event that celebrated the rich diversity of African, Caribbean, and Black cultures in partnership with Centre culturel Cerefrac and Oasis Centre des femmes.

Journal of a Young Black Woman

In May, we launched Journal of a Young Black Woman, a collection of stories written by participants & facilitators of the Young Black Women’s Project. Participants and supporters came out to the launch at Steaming Cups Cafe, where authors signed copies of the book and answered questions. The book can be purchased at Amazon.ca.

We Belong: Voices of Youth

Our second annual International Day Against Homophobia, Transphobia & Biphobia (IDAHOT) breakfast expanded on our We Belong theme to focus on young 2SLGBTQ+ voices. We welcomed community leaders and local 2SLGBTQ+ youth to the Grand Victorian Convention Centre to hear from expert guest speakers, young activists, and YouTube celebrity panelists and to promote inclusivity & belonging in our communities.

We said goodbye to our former ED, Phillip Banks, who led our agency through 4 years of growth. Phillip will be greatly missed. We wish him all the best in his new role.

We had a very busy Pride Month in June between representing Peel in the Toronto Pride Parade with the Peel 2SLGBTQ+ Collaborative, joining in Brampton’s first Pride in the Square event, and attending flag raisings throughout the region! We also flooded social media with our “Show Your Pride” campaign to celebrate 2SLGBTQ+ identities and promote allyship.

In June we welcomed new ED Nilda Patey, who brings over 20 years of experience to the role. Nilda brings her exciting vision to our agency; we look forward to building a bright future together.

Following the momentum of our Harm Reduction-themed Central Opening Doors conference this year, we dedicated the month of August to dismantling myths & stigma about drug use, harm reduction & safe consumption sites. Overdose Awareness Day on August 31st is more relevant than ever, with the opioid crisis continuing to claim lives throughout the region, province, and country.

In September, we began a new drop-in program for women in our community to empower each other through skill-sharing. This program teaches practical skills such as handicrafts, alternative therapies, and microeconomics in a safer space setting.

Our second annual Knock Down Stigma bowl-a-thon fundraiser raised over $8,000 for valuable community programs for people living with & affected by HIV! Thank you to everyone who supported the fundraiser by collecting pledges or donating. With your help, we will knock down stigma in our community.

On November 20th, we co-hosted Let’s Shout for Trans Rights, an advocacy workshop for service providers. The first of its kind in Peel, this workshop acknowledged trans reconciliation & reconcili-action.

We dedicated this World AIDS Day to spreading stigma-busting messages far and wide. Our “Spread the Word” campaign ran throughout the month of November leading up to World AIDS Day to promote Undetectable=Untransmittable, the scientific fact that people living with HIV who are taking their medication as prescribed and maintaining an undetectable viral load cannot pass on the virus to their sexual partners. We also hosted a World AIDS Day social media party that reached 17,500 people on Twitter!

We just launched this new social drop-in for people living with & affected by HIV & Hep C. Stop by and see how our new programs are designed to better serve you! Registration is free through Eventbrite.

Stay Up to Date With MOYO

Thank you! Your submission has been received!
Oops! Something went wrong while submitting the form.

By clicking "Subscribe", I agree to allow Moyo Health and Community Services to contact me regarding events, news, initiatives, and more by email. You may unsubscribe anytime.